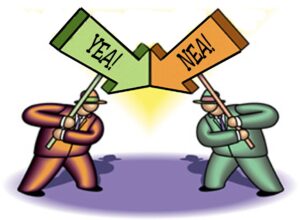 I read a piece several days ago in which the writer framed her entire argument in a manner that has become quite irritating. The premise was pretty simple. She set a simple scenario in which there were two possibilities; one was her point of view and the other was the opposing view that was defined by her interpretation of said point.
Now, with the stage set, the reader is faced with a choice. One can choose to agree with her and be a good person or agree with the other side and be evil.
The first time I can remember seeing this framing of an argument was during Bill Clinton’s presidency. He was trying to gain public support for some bill and, during this public address, had a child sitting with him in the Oval Office that was handicapped in some way. The idea was that if one was against the proposed legislation, they were against helping this kid.
This wasn’t the first time that kind of trick was used but in the 20 or so years since that day it has become the norm.
So, back to this thing I read the other day.
The title was pouring over with shame. The writer mused about not knowing how to tell people they should care about others. From the title alone we’re supposed to accept her premise that she knows what caring about others looks like and, if we don’t agree with her, we don’t. Since the vast majority of our society operate from a core of shame (more on that some other time) the field is fertile for planting.
She goes on to talk about the minimum wage and health care and other things.
She states that she’s all for raising the minimum wage because it helps people feed their families. If you don’t think that’s what it does, then you don’t care about people feeding their families. With this particular issue, there are a myriad layers and options to consider. Not to the writer in question though. You either agree or you hate people.
With health care bill it’s more of the same. You’re for universal health care or you hate people and want them to die. This poor writer is so exasperated by all of this that she, at one point, claims that she can’t talk to people from the “other party” anymore because they are fundamentally different. That could be true but it isn’t necessarily.
So what’s the point to all of this?
Well, I’m growing tired of the endless “us vs them” nonsense. The idea that we can’t have different ideas for a solution to a given problem is ridiculous. But somehow it has become widely accepted. We live in a constant barrage of we’re good and you’re evil and it grows worse every day. And, important to note here, a given group will demonize the “other side” while intentionally misinforming their side to gain more leverage.
But it is possible that we can disagree on the right solution but still come from a place of caring and wanting to do the right thing. We can, in the words of Steven Covey, “seek first to understand and then to be understood.”
But we don’t.
Instead we drink from the divisive cup we’re handed that says we’re different, they’re different and every story has to have a villain. Why? Because compromise is not important. Division is. A divided people are much easier to control. You cheer for your guy (or girl) and the people across the isle cheer for theirs. If we are fighting with each other we simply don’t have the focus to see what those in power are doing. It’s a tactic that was used in the 1600s in this country to separate the Africans from the Irish and from the Natives. Today it’s a bit more sophisticated but it’s the same idea and end game.
So this writer I mentioned is a part of the problem and probably not even aware. The self-ascribed righteous indignation is so thick it’s often hard to wade through. And people wear it with pride. Deep pride. I’m talking chin up, shoulders back, walking into the wind kind of pride.
My encouragement to you…and my challenge is to resist.
If you read, hear or watch something that emphatically states “we’re good and they’re evil” let that be a warning. Nonsense is coming. Don’t be played and manipulated into thinking that someone that sees a given issue differently than you is evil or bad or wrong. They may have the same heart for the affected people that you do…but a different way to fix it.
And finally understand this one last truth. It is proven, tested and right.
We find the best solution for the collective “we” when we find a way to compromise and when we seek the middle ground. If we can’t find our way to exercise these things again, we are doomed to fail. And fail we most certainly will do as the collective “we”.